Home Fitness Diagnosed With Cancer, What This Kickboxing Champion Did Next Will Blow Your... 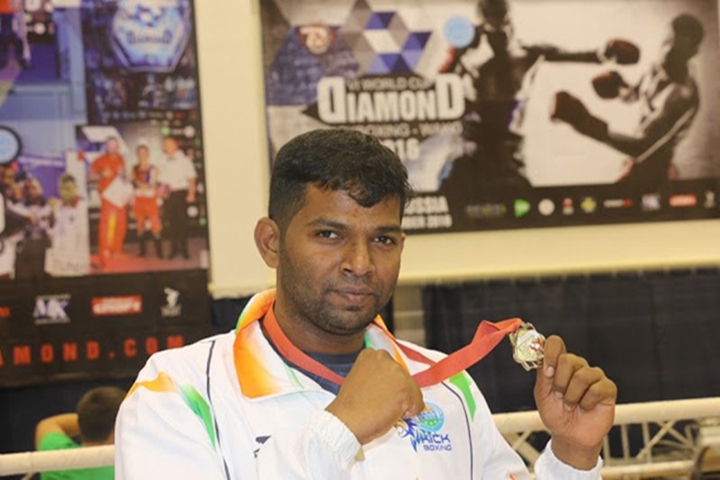 When Girish Gowda’s sister broke the news, the family wasn’t prepared for it. Then again, no family in this world would be prepared for the news that their youngest member is suffering from blood cancer. An 8-time gold medalist in kickboxing national championship and the first Indian to have won silver medals in Asia and World Championships that too with K1 ( Knockout) rules, Girish is no stranger to fighting the odds, the only  difference this time was that the fight would be for his life – this is the inspirational story of a kickboxing champion, his struggle to combat cancer and emerging as a champion.

Having lost his father at a tender age of 12, Girish had to start shouldering the responsibilities for his family very early. By the age of 18, he was already working as a delivery boy to support his family which included his four sisters and mother.

It was during this time frame that an incident occurred which would change his life. On the way home from work one day, Girish accidentally stepped on a political banner. The politician to whom the banner belonged, happened to be in the vicinity and didn’t quite approve of the accident. After a short argument, he slapped Girish publicly, leaving the 18-year-old humiliated and angry. Unable to retaliate, Girish figured it was time to learn self-defence.

A Quest For Revenge

Girish enrolled himself in boxing classes. Attending classes before and after the work hours at Kanteerava stadium, he made sure that his mother was out of the loop. However, one day his mother did find out and made his pledge that he would quit boxing. Girish gave in and quit, only to switch to Karate instead!

Enrolling himself under Mr Krishna M, a five-time black belt in Karate, this time Girish went to great lengths to hide the fact from his mother. He would hide his the karate outfit at a nearby bakery every day and would wear it only after making sure that no one was watching. He trained rigorously for two years. However, when the time to avenge his humiliation finally arrived, Girish couldn’t find it in himself to hit the politician. Instead, he decided to use his energy more productively by participating in various tournaments and championships.

It was while he was trying to represent Karnataka in Karate that his coach suggested he take up kickboxing. Another combat sport, kickboxing is closely related to karate while also borrowing moves from the Thai martial arts form, Muay Thai. Soon afterwards he won his first national championship in 2011.

Never ever give up

While the tournaments went on, Girish still had to earn a living, so he started working as a fitness instructor in a private gym, where he was introduced to XMA or Extreme Martial Arts by one of the clients.

All was going great for Girish when he suddenly started feeling unwell during one of his practicing sessions. He saw several doctors, all of whom dismissed it as flu. When his gums started bleeding, the dentist assured him that it was due to a minor infection. Every doctor so far had just prescribed generic medicines, refusing to treat Girish’s condition as anything other than a minor disease. Then came the day,when the entire world collapsed in front of him; Girish blacked out on the floor during  his training session, much to the dismay of his fellow practitioners and clients.

He was taken to the hospital immediately and after a blood test  the doctors noticed something appalling- his blood platelet count was alarmingly low. Against the normal count of 150,000 to 450,000, Girish’s reports indicated that his platelet count was a mere 4000!

Soon he was referred to the Cytecare hospital. After several more tests, doctors finally had an answer in March 2017. Girish was suffering from Acute Promyelocytic Leukemia, a form of blood cancer. It was his sister who broke the news. While Girish maintains that he kept a calm demeanour, his family took a while to cope with this earth-shattering news.

Meanwhile, Dr Hari Menon from Cytecare, one of the best Haemato Oncologist in town, took up Girish’s case. He was immediately put on for treatment for the next four months which were probably the longest four months of Girish’s life. Put under heavy cancer medication, including the dreaded chemotherapy, his body and lifestyle soon started undergoing major changes.

Girish lost nearly 20 kilos,his energy levels had reduced drastically while there was swelling in his hands. At a point of time, he couldn’t even bring himself to eat food. He also lost his hair from the treatment. To show support for Girish, a lot of his friends shaved their heads too! Despite these extreme challenges, Girish remained stoic. Now the fighter in rings had only focus, to fight cancer. The only fact that helped him in his recovery was his amazing physical fitness.

Finally, after months of the excruciatingly painful treatment process, Girish finally was declared fit enough to be discharged but for this fighter, the war was far from over. While the Dr Menon had advised Girish not to fight for at least 2 more years, his mother didn’t want him to fight at all! However, Girish had made up his mind to listen to the national anthem at least once more in the World Championship so he put himself to work once again! Not only did cancer drain him and his family out physically and emotionally but also financially.

Thank you @FocalFrame for such a wonderfull teaser.. Which shows my commitment I put into my training sessions to make myself better day by day… Every champion was once a contender who refused to give up Which is what I exactly follow to be on top

Riddled with debts and with almost no other source of income, Girish decided to go back to his career as a fitness trainer. Despite the struggles, Girish started a slow stride towards his earlier fitness regime. In fact, there was a point in time where he couldn’t do weight training due to the cannula in his arm. But once the cannula was removed and all the debts paid, Girish began training in an earnest to revive his sports career. He even coached celebrities like Prajjwal Devaraja, Meghna Raj and Abhishek Gowda.

Within a few months, Girish made a comeback and won his 9th Gold at the WAKO India Kickboxing Federation Championship in Delhi. In order to inspire other cancer patients and also as a gesture of gratitude, Girish gifted his 9th Gold medal (his first National medal) to Cytecare Hospital.

Girish has a tattoo on his right calf that reads, ‘Born To Fight’ while on his right hand he has the word ‘Indian’ tattooed after being inspired by Karan Singh Vyas who sports a similar tattoo. He says it were these tattoos that probably inspired him to keep up the fight, but deep down, everyone who has known Girish can vouch for the fact that the tattoo itself had less to do with his victory on cancer than his indomitable spirit. Currently working as a fitness trainer in Kaizen Fitness, Girish hopes that one day he can reach the international standards and bring glory to India. Gympik  salutes this warrior and his never-say-die attitude. We wish him all the very best in his quest and heartfelt gratitude for inspiring many like us!